I’m a young boy, wading knee deep in a lake on a sunny day with the breeze blowing through the mulberry trees lining the bank. My grandmother is sitting nearby in a lawn chair, dressed impeccably in summer colored clothes sewn herself, wearing a straw hat and big sunglasses and smiling when I look at her.

My grandmother and I are from different worlds, she an immigrant from Hiroshima, me, a half Asian boy growing up in the Midwest. She doesn’t speak English, but it doesn’t matter — there are big carp on the stringer and my heart is full.

Beautiful days like this were a bright spot in stark contrast to my everyday cultural experiences growing up.

I was born in 1966 when there were few Asians in the Midwest. I never heard anything positive about being Japanese; in fact, the messages I got were almost all negative.

In grade school, kids would chant “Chinese, Japanese, Nipponese, look at these!” I’d get in fights in the neighborhood and at camp over race. My baseball teammates embraced nicknames like “Chopsticks” or “Rice Bowl” for me and my brother.

And Pearl Harbor Day, my grade school teacher Sr. Bernedette vehemently would recall the “treachery of the Japanese people!” who had killed her brother on Dec. 7, 1941 while I sunk under my desk.

I never saw other Japanese except a few times a year when Mr. Aki sold fresh fish from a cold storage warehouse in Omaha. Postcards announced the special Saturday sale. And arriving on that day, everyone was Japanese! Speaking Japanese! Happily greeting my mother and grandmother.

There were tables set up in the warehouse with beautiful fresh fish from the Pacific on beds of ice. Mr. Aki in apron greeting us and cutting and weighing from the giant tuna. It was a day of celebration and joy. Punctuated by a delicious lunch of sashimi, crab, rice and all the fixings.

I left those fish sales with so much joy. But the reality was, I had already begun to mistrust people who couldn’t understand the goodness of my mom and grandma, who were both beautiful and Japanese.

Not learning about my culture left me in a vacuum

Outside of this celebration, my family never really talked about being Japanese. We didn’t celebrate the culture and customs on a regular basis. I didn’t ask. It didn’t seem like a question that I could ask.

I responded internally by becoming resentful and determined to outdo the non-target group. For me that meant everyone who lived west of 52nd Street in North Omaha.

Without ever agreeing to it, I adopted an enculturating belief that there was something wrong with being me.

All this left me in a vacuum on Asian culture and anger at the mainstream. I mean, John Wayne was always facing down swarms of Jap soldiers in the movies — I both felt bad for and didn’t want to be them.

But I loved my mother and grandmother, and as a kid, I couldn’t reconcile that with the message that there’s something wrong with being Japanese.

Piecing together what I could, I know my grandmother immigrated from Hiroshima to San Francisco in the 1920s as a 19-year-old passage-paid picture bride. She relocated to Washington state to marry my grandfather.

My grandfather was born in Vancouver, British Columbia, and spoke both Japanese and English. He worked in the logging camps of the Pacific Northwest and saved the money to get married and buy a truck. He told a story of waiting for his new bride at the port of Seattle. He was very nervous but then he was so happy when he saw this beautiful red tomato coming off the boat! They settled in Woodinville, Washington, and grew and sold produce to the vendors at the Pike’s Place Market. My mother remembers happy times in Woodinville. Her father catching fish in the streams. A dog and chickens in the yard.

My mother was born in 1935. She was 6 years old when the Japanese attacked Pearl Harbor, eventually leading to the forced relocation of her family to Tulelake Internment Camp in Northern California.

My mother has always decided not to talk about the internment camps. She says she doesn’t want to talk about the bad things, but she has told me good things: Farm neighbors, poor and white, who went to town and brought them a gift of cardboard suitcases to help in the relocation. Or a kind soldier giving her a piece of gum on the train to Tulelake. Details of Tulelake like partition walls didn’t reach the floor. Dust from the desert and her mother always sweeping. And those cardboard suitcases stowed beneath the cots.

My grandmother carried pictures of her two handsome brothers who fought in the Japanese Navy and were both killed in the war. She carried pictures of her parents who were killed in Hiroshima when the first atomic bomb was dropped by the US. With her family of origin dead from the war, my grandmother carried their legacy and poured it into her daughter.

Later, the family carried those suitcases to Omaha, sponsored by the Catholic church who put my mom all the way through nursing school. My grandmother was a seamstress, a gardener, and practiced acupuncture. My mom married my dad in a converted market in Council Bluffs when interracial marriage was still illegal in Nebraska. They had seven children — I was the youngest.

I didn’t know my grandfather Fujii, but I do know he worked at King Fong’s Chinese restaurant. From what I’ve heard, he was a funny guy who liked to drink and smoke and go to the horse races. When the priest stopped by he always joked he’d be at church next Sunday, padre, but he never made it and he never worried about it. He lost his leg from diabetes and drinking and died before I was born.

In 1990, the United States paid my mother and grandmother $20,000 each in redress for the internment. It was something, and they appreciated it — but it didn’t do much for me.

I was becoming isolated

On the outside I was doing well, but on the inside that enculturing belief from my childhood and resentment were leading me toward isolation and alcoholism.

Like my Grandfather, I began a drinking story of my own that got progressively worse. At 28, I watched my grandma die and had a moment of clarity what a good life she’d led and what a poor job I was doing.

Life and drinking became more grim and I ended up living in a guy’s basement in north Minneapolis. One fateful night I was brought to my knees asking for help from a Higher Power I didn’t know and He came in a way that profoundly changed my life.

Since that night, I’ve never had another drink. It’s been 28 years now.

I got help from the recovery community and a reluctant mentor who taught me so much about life. Larry was perfect — once stationed in the Navy in Japan, he was always telling stupid Asian jokes and teaching me to not take myself too seriously.

Today, my dead grandfather and I are at peace. I’ve been to that Woodinville farm with my mother. I’ve walked the streets of Tokyo celebrating the summer holiday. I’ve meditated with the Buddhists. And with the help of other men, I’ve bucketed out most of that unsaid, enculturating belief I call “dirty Jap.”

Now I know my family’s story

Now, my family and I celebrate who we are.

On a recent Sunday, my mom came to the house I share with my wife, Stephanie. When my mom visits, she arrives with an entourage of sisters, brothers, grandkids — three generations of my family.

There are poems, prayers, and the practice of looking into each person’s eyes happy to be with them. It’s a special day — my mother has made my daughters gifts of handmade Sashiko quilts that have designs and stories hand stitched into each square.

We celebrate a meal of sashimi, crab, rice and all the fixings — just like the days of Mr. Aki’s fish market.

I picture times like these — and that fishing lake, with my grandmother close by — when I seek an everyday calmness in my life.

They’re a reminder of the life of my family stitched together — amid all the sacrifices of their coming to America while facing down adversity.

A reminder of their example that forgiveness is the most powerful word in the English language and sometimes it tells a generational story.

ABOUT THE STORYTELLER: A professional engineer, Jim Ramm is co-founder and vice president of sales at EcoEngineers, a low-carbon consulting and audit firm. Jim lives in Des Moines with his wife, Stephanie, dog, Oliver, and cat, Macy. Three daughters and grandchildren live nearby. Jim participates in a number of community circles including the Mankind Project, Lutheran Church of Hope, Hope-Elim and the Des Moines Zen Center.

The Des Moines Storytellers Project strongly believes that everyone HAS a story and everyone CAN tell it. None of the storytellers who take our stage are professionals. They are your neighbors, friends or co-workers, and they are coached to tell by Register.

Want to tell your story at one of our upcoming Storytellers Project events? Read our guidelines and submit a story at DesMoinesRegister.com/Tell.

WATCH: Mediacom rebroadcasts stories from the most recent show on MC22 periodically; check local listings for times. A replay is also available at YouTube.com/DMRegister. 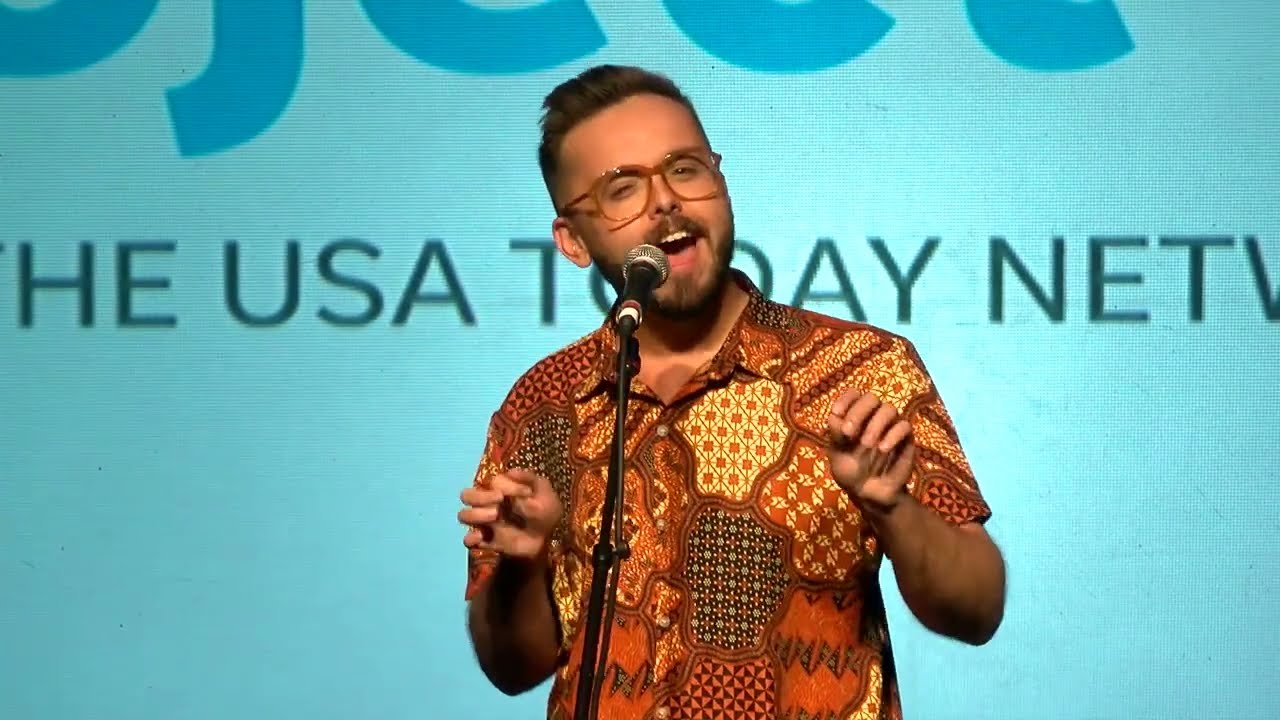 LISTEN: Check out the Des Moines Storytellers Project podcast, which is available on your favorite podcasting platforms.