A leading sports scientist has shared an incredible photo of his body transformation 15 years in the making after going vegan and being diagnosed with diabetes.

Drew Harrisberg, who lives in Sydney, took to Instagram to show off what his physique looked like as a ‘skinny teen’ and now as an adult coping with a life-long illness.

‘I strongly believe that if I hadn’t been diagnosed with diabetes I wouldn’t have achieved my current physique because there is no better daily motivator than having to manage a 24/7 condition,’ he said.

‘It’s no secret that long-term consistency and adherence is far more effective than any program or supplement.’

Drew Harrisberg, who lives in Sydney, took to Instagram to show off what his physique looked like as a ‘skinny teen’ and now as an adult coping with a life-long illness

Drew recalled a moment when a man in his gym’s locker room praised him for his rippled abs, attributing it to ‘a lot of water’.

‘On the hierarchy of what makes an aesthetic physique, drinking a lot of water barely ranks,’ Drew said.

‘If it was that easy everyone would have their dream body. Sure being hydrated is very important but it’s not going to build muscle or burn body fat.’

The advice Drew offered his fellow gym-goer was to not expect to change much in ’15 weeks’ and allow time for healthy practices to become your life. 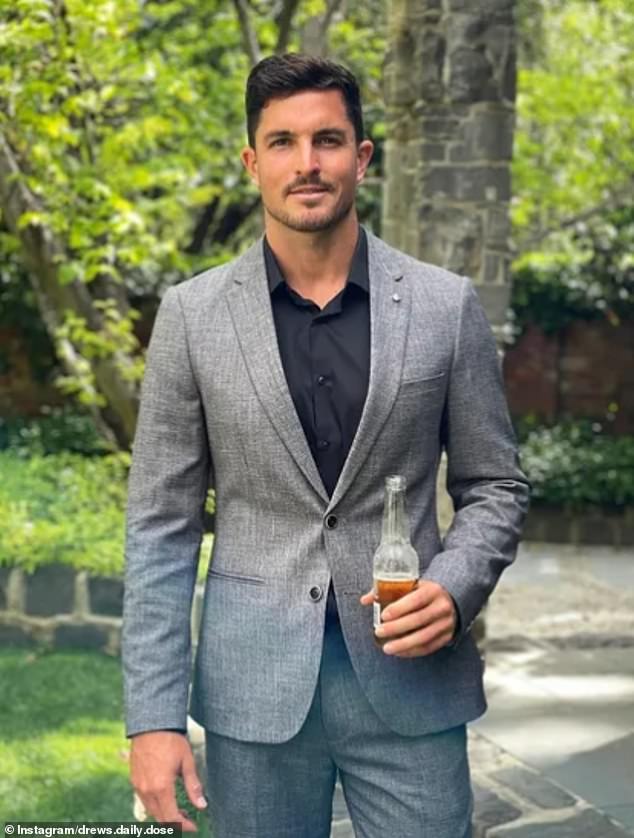 ‘He didn’t like that advice much. He wanted to hear “drink two litres of water per day”. It got me thinking how people are afraid to put in the work. They’re looking for the path of least resistance like a biohack or a pill,’ the scientist said.

‘There is a pill. It’s hard to swallow at first and might taste a little bitter. But over time it becomes easier and easier and tastes delicious. EXERCISE.’

Drew said when he first adopted a plant-based diet, all he experienced was bloating – to such an extent that for the first couple of months he looked ‘pregnant’ after finishing meals.

But now, after sticking with his plant-based approach for four years, Drew is leaner and more toned than ever. 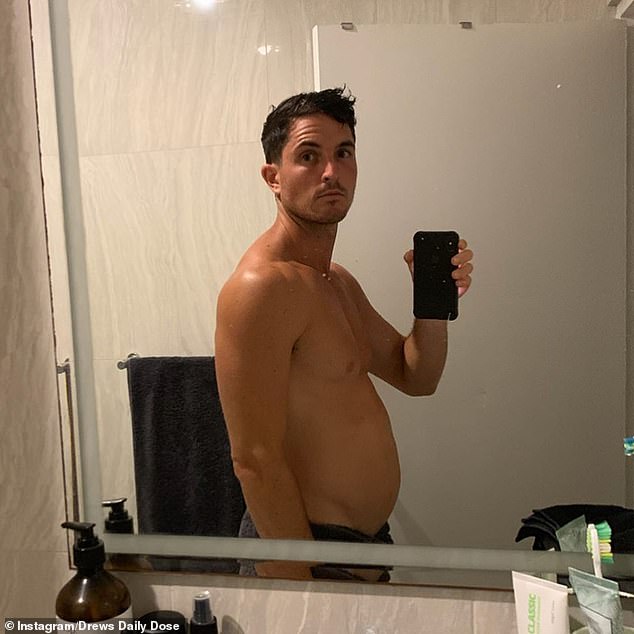 Drew said when he first adopted a plant-based diet, all he experienced was bloating – to such an extent that for the first couple of months he looked ‘pregnant’ after meals 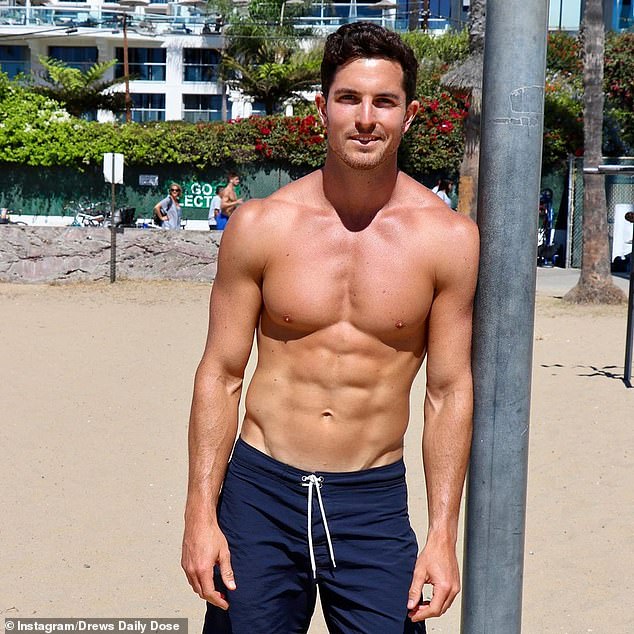 Drew said he felt as though the bloating was ‘exaggerated’ in his case, because he moved directly from a high fat keto diet to being exclusively plant-based (pictured now after going plant-based)

‘Why did I look this way? There’s evidence showing that vegans and carnists (meat eaters) have remarkably different microbiomes (bacterial gut flora).

‘When I transitioned, my microbiome wasn’t equipped to deal with the rapid influx of high-fibre foods but rather it was primed to digest animal-based foods.’

Drew said he felt as though the bloating was ‘exaggerated’ in his case, because he moved directly from a high fat keto diet to being exclusively plant-based.

He also introduced foods that he hadn’t eaten in as long as eight years while he was on a strict Paleo diet – including grains and legumes. 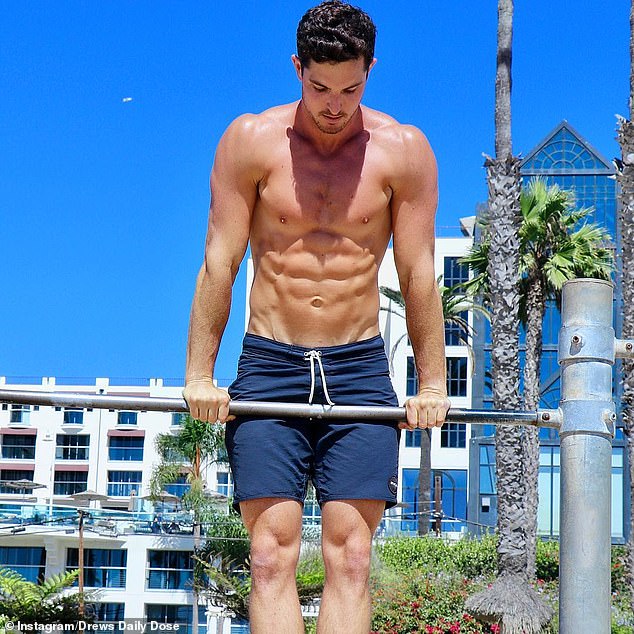 While Drew said that eventually he saw results from switching to being plant-based, he acknowledged that it takes time for the microbiome to adjust (pictured now)

Drew said that he eventually saw results from switching to being plant-based, but he acknowledged that it takes time for the microbiome to adjust to the amount of prebiotic fiber that you’re feeding it.

In this way, you need to avoid giving up too soon – and keep eating fiber until you can do without ‘any discomfort or GI symptoms’.

‘It’s amazing how the body adapts,’ he explained.

Now, Drew is leaner than he has ever been – and credits his plant-based approach for his success. 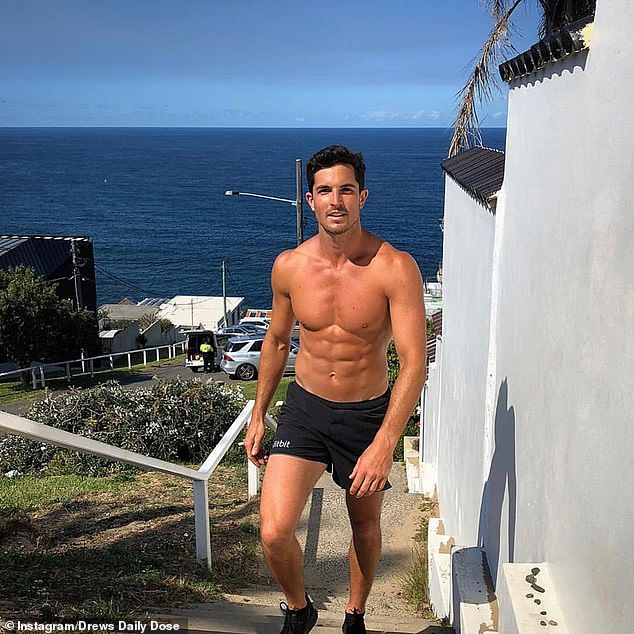 Drew (pictured) credits his plant-based approach for how his body looks now – and said his advice is to slowly introduce new foods at a time and eat slowly and more regular, small meals

Speaking about his tips for others who want to try a new eating plan and are scared that they might bloat first, Drew said it’s all about a slow and steady approach.

‘Don’t eat to the point of feeling way too full,’ he explained.

‘Instead, eat until you are about 85 per cent full so that your digestion can function properly.’

Drew also recommends eating smaller and more regular meals until your gut is able to tolerate all the fiber.

‘Slowly introduce new foods one at a time and be patient,’ he explained.

‘Just because you have symptoms now doesn’t mean you’ll have them forever.’

What is Drew’s typical day on a plate?

Dinner: Another buddha bowl or in winter a homemade curry served with quinoa or wild rice 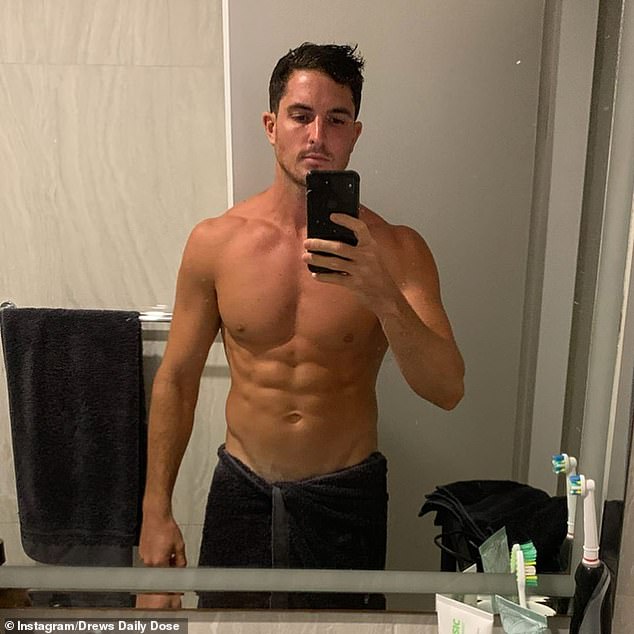 Speaking previously to FEMAIL, Drew shared the five dietary mistakes Australians make regularly – and how they contribute to people not reaching their fitness goals.

A popular dietary trend within the fitness/bodybuilding community is ‘if it fits your macros’ (IIFYM) or flexible dieting.

‘The general premise of IIFYM is that as long as you achieve a calorie deficit (burn more calories than you store) and hit your target macronutrients (protein, carbs, fat) you can achieve fat loss and get in great physical shape regardless of the foods you eat,’ Drew told FEMAIL.

‘Sure, it might get you stage-ready for a bodybuilding show but that doesn’t mean it is healthy – it’s a reductionist approach that focuses on food quantity rather than food quality.’

Drew also said that eating too many animal-based foods is a bad idea.

‘Worryingly, processed meat has been classified by the World Health Organization (WHO) as a group 1 carcinogen (known to cause cancer) and is in the same group as asbestos and smoking,’ Drew said.

‘Just because you can lose weight eating bacon, eggs, coconut oil, cheese, and drinking butter doesn’t mean it is healthy in the long term. We have lost sight of lifespan and health-span because of the desire for six-pack abs.’

Furthermore, Drew advises against eating too little fiber, eating too much protein and not eating enough plant-based foods.

‘A predominantly whole food plant-based diet made up of fruit, vegetables, whole-grains, legumes, nuts and seeds is high in fiber, water, micronutrients, and antioxidants, and happens to be a very satiating way of eating,’ Drew said.

‘I’m not saying everyone should be 100 per cent plant-based, but a predominantly plant-based diet is a great option.

‘By shifting the balance from majority animals to mostly plants (80:20 or even 90:10) you’d be eating in a way that is aligned with the longest living populations in human history, otherwise known as the blue zones.’

According to Drew, people in the ‘blue zones’ live longer than any other population across the world and they have the least amount of chronic disease.