To lose weight, you need to create a caloric deficit. Body fat is stored energy, and it’s only by consuming fewer calories that you need to maintain your weight that your body will turn to fat for fuel. This is called creating a calorie or energy deficit.

Exercise can help; it increases your calorie expenditure, so you’ll either burn more fat per day or can afford to reduce your calories a little less severely.

However, your diet is the cornerstone of any effective weight loss program. But, which diet should you follow?

The reality is that simply eating fewer calories will lead to weight loss. This means you can eat candy and takeouts, and, providing you limit the size of your portions, your body will still burn fat for fuel. The truth is your CAN out-train and lose weight on a lousy diet, although this is not a healthy approach to body recomposition.

Because most people prefer a more structured approach to nutrition, most of us will turn to a recognized diet when it’s time to shed that unwanted fat and get lean.

There are a vast number of diets to choose from, and, to one degree or another, all of them work. That said, to be successful, you MUST be able to stick to your chosen diet. Not for a week or a month, but for as long as it takes to reach your goal weight or body fat percentage. This could be a year or more if you are very overweight.

Keto and paleo are two of the most popular diets around, so for this article, we compare and contrast these eating plans so you can determine if either one is right for you.

Paleo is often touted as being the original human diet. The basic idea is that Eating paleo means that you only consume the foods that were available about 10,000 years ago – which was the paleolithic or old stone-age era. The paleo diet is also known as the caveman diet and the primal diet.

Paleo is an elimination diet meaning it bans certain foods. Back in the paleolithic era, humankind were hunter/gathers. They mostly ate foods they could catch and kill or forage. There was no farming and, as such, cultivated foods like most grains and some vegetables were not available.

What actually counts as a modern day paleo food is always up for interpretation and debate. Still, as a rule, all unprocessed animal and plant foods are okay, while most grains, dairy, and all processed or manmade foods are not.

Most interpretations of the paleo diet do not specify macros or calories. Instead, they suggest that there is a hierarchy of nutritional needs that need to be met at each meal.

So, as well as eating only natural foods, your meals should be based on protein first, veggies and some low-sugar fruits second, and then any additional natural fats third. While carbs aren’t banned on paleo, many paleo diets are lower in carbs than a standard diet simply because they eliminate grains, sugar, and other processed foods.

The foods “banned” on paleo include:

A lot of people are surprised to learn that keto has been around for over 100 years. The original ketogenic diet was used to treat epilepsy in teenage boys at the turn of the 20thcentury. It became a popular weight loss diet in the 1970s, thanks to Dr. Atkins and his Atkins Diet.

Keto is a very low carb, moderate protein, high-fat diet. While keto macro ratios vary between diets, most keep your carb intake below 50 grams per day.

Controlling your macros to this degree means you’ll need to track your food intake and use an app to ensure that you don’t accidentally consume more carbs than you should. This maybe off-putting for some dieters.

Cutting carbs to 50 grams or less per day forces your body to use fat (dietary and body fat) for energy. However, organs including your brain cannot use fat for fuel. As a result, your body converts fats into a substance called ketones which it then uses in place of carbs. This process is called ketosis, which is where the name keto comes from.

It can take anywhere from a few days to a week or two to enter ketosis, and, during this time, many keto dieters feel unwell. They suffer headaches, nausea, cramps, frequent urination, mood swings, and sleep disturbance. This is a sort of carb-withdrawal. However, once the body adapts to such a low carb intake, these symptoms, often called the keto flu, disappear.

Keto dieters must minimize their intake of all carbohydrates. This includes most fruit, some vegetables, and all grains and sugars. As such, most dieters have to become good at spotting high-carb foods and avoiding them.

This skill is very important because even a relatively small amount of carbohydrates will derail ketosis and make this diet less effective.

Keto does not place as much value on food quality as the paleo diet. In fact, there is a type of keto called “dirty keto,” where you can eat anything providing it fits your macro requirements.

For example, on dirty keto, you could eat a takeout burger providing you tossed out the bun, scraped off the ketchup, and added a slice or two of extra cheese. Needless to say, this would be less acceptable on most paleo diets. There are also keto-friendly bars and snacks, which, because they’re processed, are also no-go on paleo.

Now you know a little more about these two diets, it’s time to compare and contrast them to determine if one is better than the other. 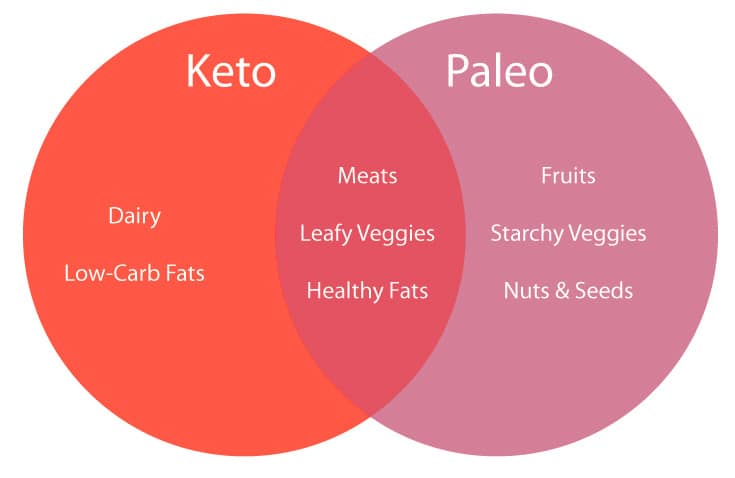 As mentioned in the introduction, any diet that reduces your calorie intake below your TDEE will result in weight loss and fat burning. Similarly, if you consume too many calories, both keto and paleo could result in fat gain.

However, between these two diets, keto is most commonly associated with weight loss.

That’s because, before you get into ketosis, your body must use all its stored carbohydrates. These stores are not replenished as you won’t be eating any carbs for the foreseeable future.

Carbs are stored in your liver and muscles alongside water in the form of glycogen. So, as your carb stores are depleted, you also lose a lot of water. This produces rapid weight loss. Therefore, it is not uncommon for keto dieters to lose 10 or more pounds in the first week of their low-carb diet.

While this weight IS largely water, it can still be motivating.

Paleo and keto are both restrictive diets. Paleo involves eating only natural foods, while keto means limiting your carb intake to 50 grams a day or less. Such restrictions can take a lot of effort, especially when you are eating out or are feeling unmotivated to prepare your own food.

That said, keto has no real focus on food quality, so you can usually find low-carb foods in any supermarket or convenience store. It doesn’t have to be grass-fed, organic, or unprocessed. For example, string cheese is okay on keto.

Paleo foods can be harder to come by, and you may not be able to find food to eat in some stores. Most convenience food is very non-paleo. So with the paleo diet, you will probably need to make more of your own food, and eating out could be very challenging. 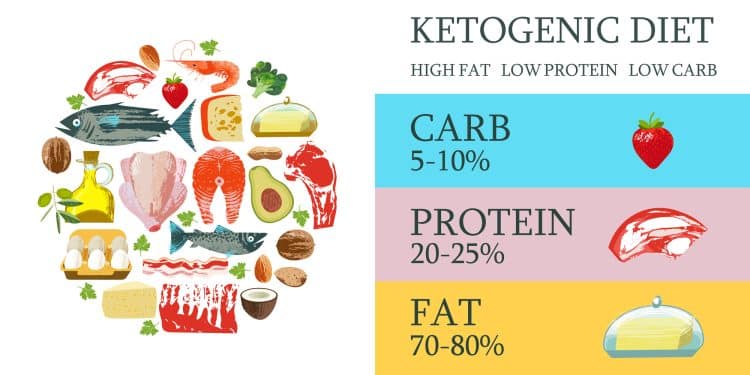 Remembering that a diet will only work for as long as you stick to it, cost is a real issue in long-term nutrition. If you can’t afford to stick to your chosen diet plan for as long as it takes to reach your target weight, you may as well not start!

Because keto places less emphasis on food quality, it’s probably the cheaper of the two diets. In contrast, paleo puts a strong focus on things like organic vegetables and grass-fed meat, which are often far more expensive than standard food variants.

It’s a safe bet that going paleo will cost more money than following the ketogenic diet.

Paleo dieters eat a wide range of low-sugar fruits, vegetables, protein sources, natural fats, and even some ancient grains, all of which are highly nutritious. A paleo diet typically contains a good mix of macros and lots of fiber, vitamins, and minerals. In addition, processed foods and refined sugars are off the menu. This all adds up to a potentially healthy diet.

Keto focuses almost exclusively on controlling the macros to achieve ketosis. It’s much less balanced, and you can do keto without paying much attention to your vitamin, mineral, or fiber intake, ie, dirty keto.

That doesn’t mean that keto is necessarily less nutrient-dense. Still, you can do keto without eating ANY vegetables or fruit. It also tends to be very low in fiber, and keto dieters often use a carb-free fiber supplement like psyllium husks to avoid or treat constipation.

There are also some questions about the healthfulness of not eating carbs and consuming lots of fat and protein instead. However, plenty of studies suggest that keto is quite safe and may even be beneficial for some populations, eg, diabetics and pre-diabetics (1).

Winner: Paleo – although keto can be healthy if you avoid too many “dirty” low-carb foods.

Losing fat is only one part of the body recomposition equation. The other is building muscle. Building muscle and losing fat will transform how you look. In contrast, just losing weight will make for a much less impressive transformation.

Intense strength training is easier when you eat carbs. Your body converts carbs into glucose, which is your primary source of energy during high-intensity exercise. Consuming little or no carbs, as you do with keto, means you may have insufficient energy to train hard enough to build muscle.

That said, ketones and fat are excellent energy sources during low-intensity exercise like prolonged cardio, so endurance athletes often do well on keto.

With no real carbohydrate restrictions to worry about, paleo is arguably the best of the two diets for muscle building, as there are plenty of paleo-approved carb foods to choose from.

Paleo vs. Keto – Wrapping Up

Paleo and keto are pretty closely matched. In fact, you can even combine these diets and do paleo-keto! That said, when viewed independently, they both offer several pros and cons that you should consider before adopting either one of them.

Paleo is generally more balanced as it does not restrict any macronutrients and puts a lot of emphasis on the quality and nutrient density of the food you eat. However, most modern convenience foods are very much off the menu, as are grains, most dairy, sugar, etc. You’ll need to learn to grocery shop and eat like a hunter-gatherer, which can be difficult for some people.

Keto is more restrictive and all but bans carbs from your diet. However, you are still allowed to eat some processed and convenience foods, which may make it more practical for some people. That said, you will need to learn to track your macros to avoid exiting ketosis, which can be a drawback for some people.

So, which diet is the best for you? Only you know the answer!

Look at both plans and then ask yourself, “which one can I imagine doing for the next 12 months?” After all, the best diet is the one you stick to. If you have any doubts about your ability to maintain your chosen diet, you should pick another option.

Ultimately, all diets work for someone, but only for as long as you follow them. That may be paleo or could be keto or another diet altogether. Make sure your new diet fits your lifestyle as seamlessly as possible, and you’ll get the results you want.